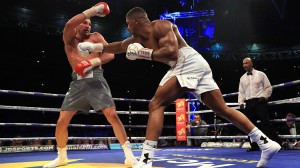 Sky has created a virtual-reality highlights film of the April 29 world heavyweight boxing match between Vitali Klitschko and Anthony Joshua that is available for download via the Sky VR app.

The 12-minute film was created by Sky’s dedicated in-house VR production unit, Sky VR Studios, and looks at the preparations of both fighters ahead of the match as well as the bout itself. The match was filmed using eight custom-built VR cameras.

The Sky VR app is available to  to download on a compatible mobile from Google Play or the App Store. The app will let anyone watch immersive Virtual Reality content on a Smartphone either in conjunction with a Google Cardboard headset or in 2D (360 degrees) without a headset. The app will also work when using Samsung Gear VR, Oculus Rift and Daydream.

In addition to the Klitschko-Joshua match, the app has been used to air content from Sky VDR Studio and from third-party content providers. Experiences aired to date include Factory 42-produced Giselle, full-length documentaries about Team Sky and Premier League football highlights.

Neil Graham, executive producer of Sky VR Studios, said: “There’s no doubt that this was one of the all-time great heavyweight fights, and it was an incredible to be given such unprecedented access to the action. The resulting film takes viewers closer to the action than ever before – closer than Arnie’s ringside seat.”