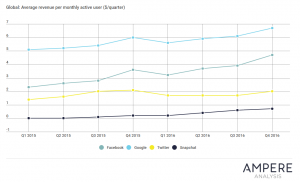 Facebook is “closing the gap on TV advertising” with the average Facebook user to soon be worth more than an average TV viewer, according to Ampere Analysis.

The research firm said that the average revenue per-user generated by Facebook advertising has grown six-fold in North America and four-fold in Europe in the past five years.

This places it behind Google, which is closest to TV on the ARPU measure.

Google currently and makes around US$7 per quarter for each monthly active user (MAU) from advertising on its sites while Facebook is close to US$5 per MAU.

When it comes to TV, the average viewer is responsible for between US$10 and US$11 of advertising revenue per quarter.

However, the value of a TV viewer has remained relatively flat with growth of less than 7% in both North America and Europe over the same half decade.

“It may be in second position now, but when it comes to ARPU, Facebook advertising has been rapidly closing the gap on Google’s lead,” said Ampere research director, Richard Broughton.

He said that one advantage that Facebook has is its ability to let advertisers keep track of the effectiveness of their online ad campaigns compared to traditional TV advertising.

“As Facebook continues to invest in video and its ARPU increases, it is conceivable that in the not-too-distant future an average Facebook user will be worth more than an average TV viewer in terms of advertising,” he said.