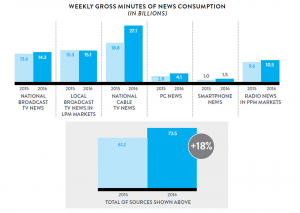 US adults spent 72.5 billion minutes consuming news in the average week in 2016, an 18% increase from the prior year, according to Nielsen.

TV news was by far the biggest source of US news consumed last year, followed by radio news, news consumed on PC and then smartphone news, according to the study.

“Americans responded by watching, listening to and reading more news – a lot more news. Our tally of increased usage across national and local TV, radio and digital sources shows a 2016 increase of 11.2 billion minutes of news consumption per week, compared to 2015.”