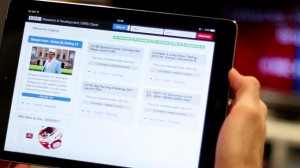 The BBC is partnering with Opera TV to showcase a number of HbbTV 2  implementations at TV Connect this week relating to syncing content.

The engineering prototypes include a synchronisation between a companion app and an adaptive bitrate MPEG DASH stream playing on the TV – showing that the same syncing technology works for streamed content as well as broadcast TV.

“Our companion app shows how precise the synchronisation can be by playing the same video as on the TV or playing alternative sound, such as the Audio Description,” said BBC senior R&D engineer Matt Hammond.

The corporation said that having the option to use a companion device in this way means that viewers could listen to an audio description by plugging headphones into a phone or tablet. The app can also synchronise with the TV, allowing viewers to “seamlessly transition” from device to device “without a jarring gap”.

Also on show will be functionality that means the BBC’s companion app now understands the schedule for a broadcast channel and knows “exactly when each programme begins and ends”.

In a blog post explaining the developments, Hammond said that this “opens up many possibilities to help our audience get more from our services” – including surfacing information such as who starred in a programme or what food recipe was shown on-screen, without a viewer having to search for it.

“See an interesting trailer for a programme? The app could offer to bookmark it and remind you when the programme is broadcast or becomes available on iPlayer,” said Hammond.

“What to watch next? The app could know when the programme is finishing and proffer suggestions to you. It could even tell your TV to start playing the programme you choose in iPlayer.”

The BBC demo will be run on an Opera-provided HbbTV 2 set-top-box and marks part of its ongoing efforts to collaborate with the industry as part of its BBC Companion Screens project.

Opera TV specialises in the middleware that provides the HTML and JavaScript environment in which HbbTV 2 applications run. The company’s solutions are used by a variety of manufacturers that make products for the UK market.

TV Connect is happening at ExCel London from March 28 – 30. The demo will be available to see at the Opera TV booth on stand B10.