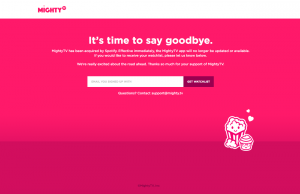 Spotify has acquired MightyTV, a startup that uses machine learning to provide users with personalised lists of TV shows and movies.

Announcing the deal, Spotify said that MightyTV founder and CEO Brian Adams would join as vice-president of technology, focused on advertising and marketing technology solutions.

He will use his knowledge of programmatic advertising and personalised recommendations to help develop the music streaming service’s ad products and its marketing platform.

“The content recommendation system MightyTV has built is incredibly aligned with how we think about advertising technology and marketing personalisation,” said Spotify vice-president of product, Jason Richman. “Brian and his team will help us continue to innovate on free monetisation and extend our leadership position in programmatic audio.”

MightyTV launched in the US last April with the aim of making it easy to find something good to watch, surfacing videos based on personal tastes and what users have in common with friends.

The firm offered recommendations from HBO Now, Crackle, Amazon, Netflix, Showtime, Hulu and Cinemax raised a US$2 million round of seed funding in August to support its growth and “further enhance the video discovery process”.

MightyTV confirmed its acquisition in a post on its website and said that its app will no longer be updated or available, effective immediately.

“Spotify has built the leading marketplace for fans and creators. It’s an enormous opportunity for me and the team to help create native brand experiences that stay true to a product that millions love,” said Adams.

Prior to founding MightyTV in 2015, Adams founded Admeld, a publisher monetisation platform that was sold to Google in 2011. He then joined Google to run the Doubleclick Publisher Platform.

The MightyTV team will be based in Spotify’s offices in New York, Toronto and Stockholm.