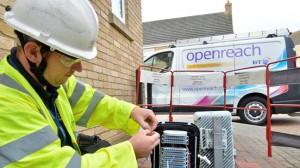 BT has been fined £42 million for a “serious breach” of Ofcom regulations, after it reduced compensation payments to telco rivals when it failed to deliver Ethernet broadband services on time.

The UK broadcast and telecoms operator said the penalty is a result of an investigation into BT’s Openreach internet infrastructure division, which found that between January 2013 and December 2014 BT misused the terms of its contracts to reduce compensation payments for late installations.

Ethernet services are dedicated high-speed cables that are used by large businesses, and mobile and broadband providers, to transmit data – which Ofcom’s investigations director, Gaucho Rasmussen, described as a “vital part of this country’s digital backbone”.

“Millions of people rely on BT’s network for the phone and broadband services they use every day,” said Rasmussen. “We found BT broke our rules by failing to pay other telecoms companies proper compensation when these services were not provided on time.

“The size of our fine reflects how important these rules are to protect competition and, ultimately, consumers and businesses. Our message is clear – we will not tolerate this sort of behaviour.”

Ofcom said it had taken the action because BT breached rules that address the company’s ‘significant market power’ – which stems from the fact that most telecoms companies rely on access to BT’s network to provide services, such as broadband, to their customers.

The news comes in the same month that BT reached an agreement with Ofcom to legally separate Openreach. The deal will establish Openreach as a distinct company with its own staff, management, strategy and an obligation to “serve all its customers equally”.

The deal drew to a close protracted discussion between BT and the regulator, during which BT rivals including Sky, TalkTalk and Vodafone repeatedly called for the separation of BT and Openreach.