North American pay TV use to drop to 75% 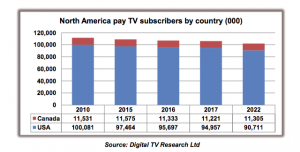 The Digital TV Research report predicts that the number of pay TV subscribers in the US and Canada will drop by 9% in the ten years from 2012 to 2022 – from 112 million to 102 million.

At the same time the number of non-pay TV homes is tipped to climb from 20.69 million to 41.56 million over the same period.

“Where are the lost subscribers in the decade to 2022 going? Some analogue cable subscribers will give up paying for TV services rather than convert to an often more expensive digital platform,” said Digital TV Research principal analyst, Simon Murray.

“Cord-cutting is also a factor. It has been somewhat exacerbated by the traditional pay TV operators starting their own OTT platforms: satellite TV platform Dish provides Sling TV and DirecTV Now has recently started. Other distractions include Hulu, HBO Now and, of course, Netflix and Amazon Prime Video.”

The research said that the number of pay TV subscribers declined by 2 million in both 2015 and in 2016, but predicted this rate of decline will now slow down.

Cable has been losing subscribers since 2011, partly because not all of the 18 million analogue cable subscribers recorded at the end of 2010 will convert to some form of digital pay TV platform, according to the research.