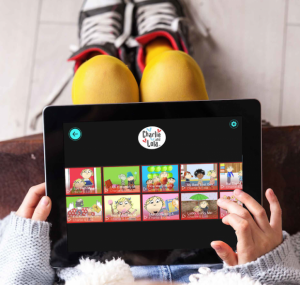 The on-demand service has licensed a package of CBeebies titles from BBC Worldwide, the commercial arm of the UK public broadcaster.

Its founders noted Charlie and Lola is already the most-watched show on the service.

The programming comes from CBBC and preschool service CBeebies and animation and live-action.

For older kids there is wildlife series Deadly 60, dance drama The Next Step and live-action comedy/history show Horrible Histories.

Azoomee raised £800,000 in a crowd funding push last year and former Nickelodeon UK boss Howard Litton is advising it on its programming line-up.

“Acquiring this blue-chip BBC kids content is an exciting and crucial step in cementing Azoomee’s already growing reputation as a ‘good for you’ quality platform for children in the UK,” he said.

As well as acquired fare, Azoomee has already moved into original programming with its animated series Search It Up.

The service is run by Estelle Lloyd, former MD of publisher Centaur, and Douglas Lloyd. It is available over the top and has a distribution deal with mobile telco O2.