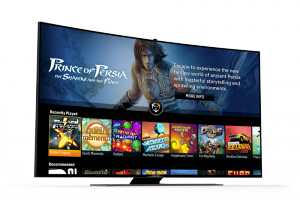 PlayJam titles are optimised for TV and users can control the games using their smartphone or tablet by downloading either the iOS or Android PlayJam app.

“We’re thrilled to be able to bring a host of fantastic gaming content to owners of our H3 Espresso to keep the whole family entertained throughout the Easter break, Bank Holiday weekends and beyond,” said Humax vice-president of sales, Graham North.

“Whether playing together as a family in one room, or streaming to the kids’ bedrooms so they can keep themselves amused, PlayJam adds a new dimension to the H3 Espresso.”

PlayJam CEO Anthony Johnson said: “PlayJam, an established distributor of digital content, is delighted to be rolling out its next generation entertainment platform with Humax, providing a comprehensive range of education and gaming content at launch, with a planned roll out of OTT video services in Q2 designed to appeal to the whole family, and bridge the gap between TV and YouTube.”

Humax launched its H3 Espresso device at the end of last year. The box is designed to deliver aerial-free, multi-room TV anywhere in the home via the owner’s wireless network, without the need for extra sockets or tuners.