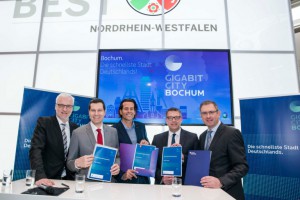 Liberty Global’s German subsidiary Unitymedia is to roll out DOCSIS 3.1-based internet services in the city of Bochum in the Ruhr area of North-Rhine Westphalia.

According to Unitymedia, the rollout will deliver Gigabit-speed internet to 95% of Bochum residents by the end of next year, with the first residents to be connected in the first quarter.

Unitymedia has teamed up with the city of Bochum to extend its network further. The city has applied for funding to develop broadband infrastructure and has already connected 16,000 residential units to a fibre network.

North-Rhine Westphalia minister of economic affairs Garrelt Duin hailed the agreement as an example of how cooperation between telecom companies and municipal authorities could further the expansion of fast internet services.

Bochum mayor Thomas Eiskirch said that the agreement was set to make Bochum the “fastest city in Germany”, making it a more attractive place to live and work.

Unitymedia CEO Lutz Schüler said the investment would make Bochum the first “gigabit city” not only in Germany but in its parent company Liberty Global’s Europe-wide footprint.