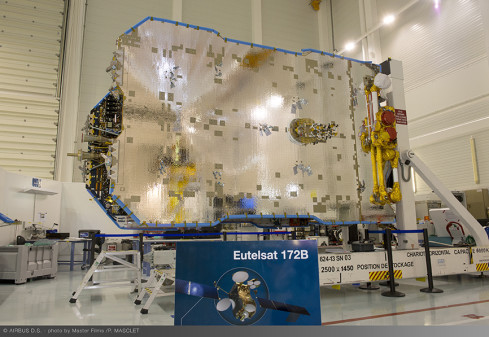 Eutelsat’s first high-power all-electric satellite is to be shipped to French Guiana on March 20 ahead of its planned launch on an Ariane rocket on April 25.

The satellite will be located at 172° East, providing reach over the Asia-Pacific region and the Pacific Ocean.

The satellite will replace the Eutelsat 172A satellite and will include C and Ku-band payloads connected to a range of footprints.

A new Ku-band multi-beam payload delivering 1.8Gbps of throughput will serve what Eutelsat describes as the world’s fastest-growing region for air traffic, with over 8,000 aircraft to be delivered to the region by 2034.

According to the operator, Eutelsat 172B will be a major growth platform for in-flight connectivity, thanks to a deal with Panasonic Avionics. Eleven elliptical spotbeams will enable Panasonic to bridge the West coast of North America to Asia and Australia.

New technologies deployed on the craft include the Multi-Port Amplifier (MPA), an innovation that will dynamically distribute power between the 11 spotbeams in response to surges in capacity on board aircraft.

The satellite is expected to enter service in third quarter 2017.