Mobile to account for 60% of online video views this quarter 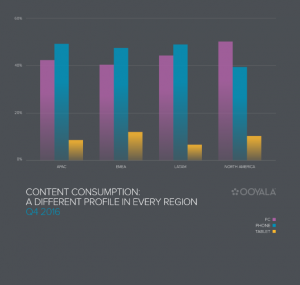 The online video platform provider said that long-form content continues to grow on mobile devices, representing 47% of all mobile plays in the fourth quarter, outpacing short-form video plays at 40%.

Ooyala’s Q4 2016 Global Video Index said that content providers must “tailor their strategy around mobile”, particularly as it becomes a go-to device for longer videos.

“We see a steady increase of premium subscription and ad-supported content coming over the top, and the consumer is determining which will be the winner,” said Ooyala principal analyst and strategic media consultant, Jim O’Neill.

“Based on our data and feedback from customers, we see the modern TV model evolving into one that involves both, a hybrid of SVOD and AVOD and accessible on every device.

“The bottom line is TV of the future will not be anything like the legacy TV market we all grew up with.”

Globally, Ooyala said that smartphones and tablets represent 56% of all advertising-supported video-on-demand views.

Smartphones made up the bulk of this consumption at 45%, compared to 11% for tablets, while desktops accounted for 44% of AVOD video views.