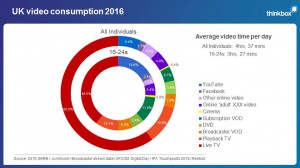 TV accounted for 74.8% of UK video viewing last year, down slightly from 76% in 2015, though total video consumption was up year-on-year, according to Thinkbox.

The UK marketing body for commercial TV said that total video consumption increased from an average of 4 hours, 35 minutes a day in 2015 to 4 hours, 37 minutes in 2016.

The research claimed that TV still accounted for 56.4% of 16-24 year-olds’ video viewing last year, but said this was a decline on 27.6% in 2015. People in this age group also watch less video in total than the UK average at an average of 3 hours, 27 minutes.

Thinkbox said that TV still accounts for 94% of video advertising time, the same as 2015.

“TV is a trusted, high quality environment for advertisers that is proven to work. It has a huge variety of premium programming across every genre and can satisfy the demands of many thousands of advertisers simultaneously and for the long-term,” said Thinkbox CEO Lindsey Clay.

The Thinkbox analysis is based on data from The Broadcasters’ Audience Research Board (BARB), comScore, the IPA’s Touchpoints 2016 study, Ofcom’s 2016 Digital Day study and Rentrak box office data.