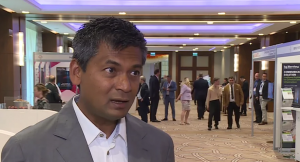 5G is not ready for wide-scale rollouts and the technology “makes no sense” as a substitute for fixed-line access, according to Balan Nair, CTO of Liberty Global.

Speaking at Cable Congress yesterday, Nair said that the use of higher frequencies – key to plans for 5G networks – was challenging and that significant investment would be required to make the technology viable.

Nair said that Liberty Global nevertheless “believes in mobile” and that the optimal approach for the company was to build full MVNOs, which gave it sufficient control to ensure that churn is kept to a minimum.

Addressing the evolution of fixed networks Nair said that the economics of DOCSIS 3.1 give cable operators a massive advantage over rival operators.  He said the development of symmetrical bandwidth services over coax would give cable and even stronger advantage.

Nair said that Liberty Global would continue to operate a hybrid TV service combining QAM-based broadcast linear channels with IP-based services. He said that the user interface would in the future be entirely IP-based, as would video-on-demand services. However, said Nair, Liberty remained committed to providing TV services via set-top boxes, which he said “provides security” in delivering a range of services.

Nair also said that it was important for a company like Liberty to “think big, but act small”, meaning that it should avoid creating bureaucracy and avoid behaviours like bullying suppliers.