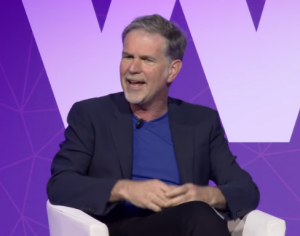 Mobile operators are likely to experiment with new ways of selling mobile data that could help Netflix extend its reach – if it can provide high-quality streamed content at ultra-low bit-rates – according to CEO Reed Hastings.

In an on-stage interview at Mobile World Congress in Barcelona yesterday, Hastings said that mobile network operators would look at new ways to package data that would enable devices to be used more extensively to consume video, including in developing markets.

“We will see companies pioneer new ways [of packaging data] including offering unlimited data but at a lower speed, which is very efficient for the networks. What we have done on our side is invest in codecs to give incredible picture quality… at 300kbps in some cases. We are getting more and more efficient at using operators’ bandwidth,” Hastings said.

He claimed that mobile operators are also looking at offering video, which they see as a compelling proposition, outside of existing data caps. This would remove a barrier that prevents cost-conscious consumers from using devices to view bandwidth-hungry, long-form video content.

Hastings said that Netflix is investing in network servers and also in the development of video codecs in order to improve the bandwidth efficiency of video and enable instant playback of its content anywhere on any device.

“We have learned so much about how to improve the internet experience,” he said, adding that download options had been introduced to provide fill-in where mobile bandwidth is expensive or unavailable. Hastings said that Netflix is still learning and that the quality of the service on different devices would improve in time.

Name-checking Netflix’s announcement that it is working with LG to integrate HDR capabilities into phones, Hastings said that mobile screens today are “just stunning”. However, he played down any notion that Netflix may seek to develop content specifically tailored for mobile consumption, claiming that Netflix is focused more on stories than adapting content to a particular screen size. “We don’t design format[-specific content]. Maybe we’ll look at that some day but we want to focus on content you can watch on any screen.”

Aside from his comments about potential changes in the way mobile video is packaged, Hastings’ keynote at MWC failed to provide much new information about the global streaming video giant’s plans.

Fielding a series of questions from the BBC’s Francine Stock that were notable mostly for their blandness, he reiterated that Netflix wanted to make content locally that could be distributed globally, citing Cable Girls, a forthcoming Spanish series about telephone exchange operators in the 1930s, as an example.

He said that Netflix was committed to filming a growing amount of content in multiple languages: “What is happening is that as our membership grows we have 100 million around the world and half is international. That gives us an attractive platform and can provide global reach for a film.”

Hastings also said he expects Netflix’s famous binge viewing model to become the norm as content migrates to the internet and said there was nothing really new to it – comparing it to reading a novel. “The internet has brought back binge viewing to human beings. You will see most linear networks covert to binge viewing and that is very exciting.”

Hastings’ appearance came after Netflix won its first Oscar award for The White Helmets, about rescue workers in Syria. Citing this as an example of the edgier content the SVOD service is now producing, Hastings also name-checked Thirteen Reasons, a new series about a teen suicide that is due to be released shortly. “Bringing that conversation out in the open is very important. We have so much we want to share with the world.”