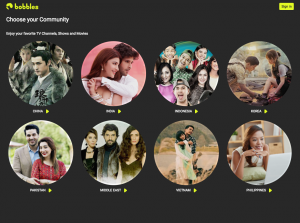 Bobbles.tv has rolled out over the top and over satellite, focusing on reaching Indian ex-pats in Europe with a package of well-known Indian channels from Sony, Star and Viacom among others.

The programming on German-based Bobbles is carried in Hindi and English across 16 themed channels. These include B4U Movies, B4U Music, Star Gold, Sony Max, NDTV and Viacom’s Colors.

The service is priced at €19.95 for the satellite option and €12.95 for the streaming service.

Bobbles estimates there are 14 million Indian ex-pats globally and over one million in Europe and claims its new service is the biggest and most affordable Indian TV package in the region.

“As many as 1.5 million Indian people living in mainland Europe now have a convenient way to receive their favourite TV shows from home, via satellite or OTT, live or on catch-up,” said Arnold C. Kulbatzki, Bubbles Media CEO.