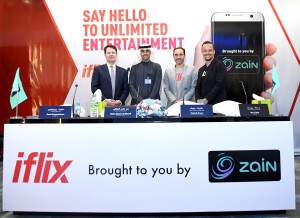 South-East Asian SVOD provider Iflix is launching a version its service in the Middle East and North Africa in a joint-venture partnership with Kuwait-based mobile telecom operator Zain.

Iflix Arabia will be headquartered in Dubai and will offers services wherever Zain is present in the region, including Kuwait, Bahrain, Iraq, Jordan, Lebanon, Saudi Arabia and Sudan, with the potential to further extend into additional regional markets.

The service is scheduled to launch in the second quarter of this year, giving access to its content to users in the region and specifically to Zain’s mobile user base. Content will be subtitled in Arabic and English and will include a number of first-run exclusives, according to the pair.

Iflix Arabia will be led as CEO by John-Paul McKerlie, who has served as Zain’s consumer marketing director since last May, having previously worked for Bahtrain operator Ooredoo.

Iflix is also planning to offer Arabic content, with a number of Arabic shows and movies to be included and a promise of excluisive Arabic series to come.

The SVOD provider’s platform provides uses adaptive bit-rate encoding to ensure that content can be viewed over variable bandwidth connections, and also provides a download function for offline viewing.

Iflix launched in South-East Asia in May 2015 and is currently available in nine markets with over four million users.

Zain has 47 million mostly young customers in the MENA region.

“The establishment of the joint venture ‘iflix Arabia’ instantly creates enormous value for both Zain and iflix stakeholders, given the synergies created and the new revenue streams that will be generated by the expected takeup of this appealing internet TV service from the general public and Zain customers. This is a monumental step forward for Zain in our journey to become  the premier digital lifestyle provider in the MENA region,” said Zain vice-chairman Bader Al Kharafi.

“The teaming of Zain and iflix has empowered both businesses with the capacity to offer customers the most incredible content services.  A great mix of local and international catalogues will reach audiences using Zain’s leading networks, guaranteeing the best speeds for streaming and user experience, bringing even more content to customers and enhancing their viewing experience.  We are very excited about the launch and what it means for our customers and shareholders in the future,” said McKerlie.

As part of a push to expand outside of Asia, Malaysia-based Iflix last year named former StockUnlimited and Getty Images executive Christian Toksvig to head up international development, along and Iktomi founder Nader Sobhan as head of Middle East and North Africa.