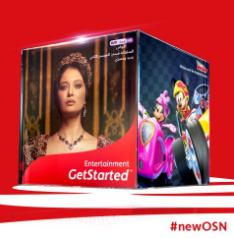 Middle East pay TV provider OSN has revamped its offering with new packs and new price points in the wake of an extensive customer research project across 40,000 homes in the region.

The new services will be made commercially available from tomorrow.

The company is offering customers a choice of new sports, movies and entertainment packs that it claims will let customers create their own mix based on what they want to watch and their available spending power.

OSN said that the revamp had been the initiative of new CEO Martin Stewart, the former CEO of Spanish cable operator Ono, now owned by Vodafone, and CFO of Sky, who took over at the UAE-based operator in August last year.

Faisal Hamad Al Ayyar, Chairman of OSN, said: “OSN has consistently set benchmarks in the region’s entertainment landscape through its exclusive content partnerships and an unbeatable viewing experience. We are pushing the boundaries and making this value proposition available for one and all, marking a new era for the entertainment industry. This is the organic evolution of OSN, a response to what our customers want.”

IHS Markit last year estimated that OSN was on track to lose about 50,000 subscribers in the course of 2016, with increasing churn, which it attributed primarily to competition from IPTV services Ooredoo in Qatar and STC in Saudi Arabia as well as BeIN Media.

While beIN Media has moved aggressively into the entertainment genre and added a range of kids content from the likes of Turner, Discovery, the BBC and DreamWorks animation, OSN remains the leader in offering Arabic-language entertainment content, with a strong offering of Arabic channels.