Apple’s first originals to launch in ‘next few months’ 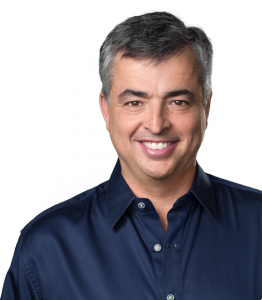 Apple’s first originals – Carpool Karaoke and Planet of the Apps – will launch on Apple Music in the “next few months”, according to Apple’s SVP of internet software and services, Eddy Cue.

Speaking at the Code Media conference in California yesterday, Cue showed a clip of Planet of the Apps and revealed details of the Ben Silverman-produced show, which will see app developers pitch for financial backing and then promotion through the App Store.

The series will be available “in most countries in the world” as part of Apple’s 18-month old subscription music offering, as will Carpool Karaoke – Apple’s previously announced Late Late Show with James Corden spin-off.

Appearing on-stage alongside Ben Silverman to discuss Planet of the Apps, Cue said that the shows will be exclusive to Apple Music, won’t appear on traditional television and will be available across Apple TV, Mac and iOS devices.

“We think that video can be a very important part of Apple Music. It’s one of the differentiating factors that we can add,” said Cue, asked about the reasons for Apple’s move into this space.

“We’re just starting out and we’re excited. We think these shows bring something to customers that haven’t been seen before, so there’s something unique, special that we’re bringing to the table. I think there are more ideas like that that we have, so we hope to continue doing more – and we’ll see.”

Cue said that Apple has a “real opportunity in the TV space” but is interested in doing programmes that aren’t being done by anyone else – ones that take advantage of its platforms.

For this reason he played down the logic of Apple merely buying a large producer and distributer of content – such as a Netflix or a Time Warner – or signing up to make a big budget drama series like Game of Thrones.

“We’re not taking the traditional route. This [Planet of the Apps] is a show that’s unlike anything that we see out there that we are able to add value to,” said Cue.

“Carpool Karaoke is in a same vein, so the idea is that we do things that we add a certain value to. It’s not just going off the shelf and buying shows. “

Planet of the Apps will see contestants pitch for investment from what Apple described as “four of the world’s most culturally influential entrepreneurs” – Will.i.am, Jessica Alba, Gary Vaynerchuk and Gwyneth Paltrow.

After a sixty second ‘escalator pitch’ developers try to partner with one of the four advisors. After developing their ideas they will then pitch to VC firm Lightspeed Venture Partners and successful apps will be featured on the Apple App Store.

“For us, we’re really excited because a show about apps doesn’t work unless you’re partnered with Apple,” said Silverman, a TV industry veteran and the co-CEO and chairman of production company Propagate.

“We may have been able to get every traditional network invested, but we didn’t have a prize. You can’t do American Idol without Sony BMG giving the recording contract.”

Planet of the Apps will launch this spring, with a new episode made available each week – rather than a full block of programming being released at once in a Netflix style.

Cue said that Apple Music currently has “well past 20 million” subscribers, and claimed there is still huge room to expand. “There’s billions of people listening to music, so we still think the potential for growth is exponential”.

In an interview with UK newspaper The Independent, Cook said: “I’m excited about augmented reality because unlike virtual reality which closes the world out, AR allows individuals to be present in the world but hopefully allows an improvement on what’s happening presently.”

“I regard it as a big idea like the smartphone. The smartphone is for everyone, we don’t have to think the iPhone is about a certain demographic, or country or vertical market: it’s for everyone. I think AR is that big, it’s huge.