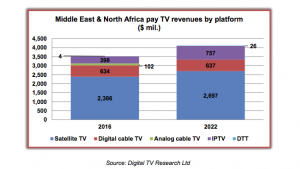 Digital TV Research has downgraded its pay TV revenue forecast for the Middle East and North Africa (MENA) region by US$1 billion.

The research firm now predicts that MENA pay TV revenues will reach US$4 billion in 2021, down from an earlier forecast of US$5 billion.

Israel came next with a decrease of US$220 million, with the report noting that this market in particular is seeing over-the-top services compete with traditional pay TV operators.

The UAE followed with a US$174 million cut in estimated revenues, while Saudi Arabia will suffer an estimated US$149 million drop.

Overall, Digital TV Research said that Turkey, Israel, the UAE and Saudi Arabia will account for 90% of the revenue shortfall between its last two Middle East and North Africa Pay TV Forecasts.

However, Murray said: “It’s not all bad news, with Kazakhstan, Kuwait, Qatar and the UAE enjoying good growth.”

By 2022, the research claims that MENA pay TV revenues will reach US$4.12 billion, while the number of pay TV homes will hit 19.52 million.

The number of TV households that paid for TV signals in 2016 was 18.7%. This is tipped to grow to 22.2% by 2022. Meanwhile, Digiturk is expected to remain the region’s largest pay TV operator in terms of subscribers.