Four fifths would cancel ‘out of touch’ OTT service 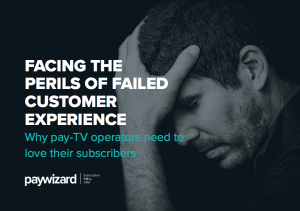 Some 84% of consumers would ditch their digital pay TV provider if the service and support became poor and the company “seemed out of touch with their needs and preferences”.

This is according to a new industry survey by payments specialist PayWizard, which warned about “the price of poor customer experience” for pay over-the-top operators.

The report said that the flexibility of services like Netflix had led to “much higher rates of subscriber churn” and that 24% of all consumers had terminated a relationship with a digital pay TV provider in the past 12 months because the service, support and overall customer experience were very poor.

On the other hand, 46% of all consumers said they have retained a digital pay TV subscription they “might otherwise have terminated” because of positive customer experience – a figure that rose to 57% among those aged 18-35.

“While content and cost are often cited as the elements influencing pay TV uptake and cancellations, the survey findings demonstrate that customer experience has undeniably emerged as a major driver.”

PayWizard said the survey data and findings from previous focus groups indicate “a shift towards a future where subscribers pick and mix a range of content services”.

Some 64% of consumers who had not taken up a new subscription in the past year said they would cut back on other digital subscriptions or downgrade a general package to cut the cost if they were to sign up to a new OTT service.

The research was conducted in the fourth quarter of 2016 and is based on an online survey of 6,242 consumers across six key TV markets – Australia, Brazil, Germany, Singapore, the United Kingdom and the United States.