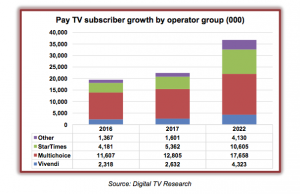 The number of pay TV customers in Sub-Saharan Africa will almost double between 2016 and 2022, according to new research.

The Digital TV Research report claims that the total will climb from 19.47 million pay TV subscribers across 35 countries at the end of 2016 to 36.72 million by 2022, with the proportion of pay DTT households increasing over this period.

By operator, Multichoice is predicted to remain the biggest pay TV player in the region, though its market share will drop slightly as StarTimes makes up more ground. Vivendi’s marketshare is expected to stay roughly flat in the years to 2022.

“With a limited number of DTT licenses on offer, StarTimes is focusing more on its satellite TV operations, which is disrupting the sector. StarSat is much cheaper than DStv and Canal Plus and not that much more expensive than pay DTT,” said Simon Murray, principal analyst at Digital TV Research.

Sub-Saharan pay TV revenues are expected to climb from US$4.20 billion (€3.9 billion) in 2016 to US$6.59 billion in 2022, with South Africa and Nigeria contributing nearly half of the region’s pay TV revenues by then.