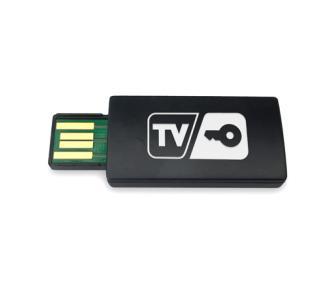 The TVkey was developed by Nagra as a cost-effective way to offer content protection for 4K UHD TV services that meets the Hollywood studios’ content security requirements.

Viewers can sign up for a pay TV package through a simple sign-up process, either via a TV app, a web portal or a call centre, with no additional set-top box or installation required, according to Nagra, which unveiled the technology at IBC last year.

Simon Trudelle, senior product marketing director at Nagra told Digital TV Europe at IBC that the key could be used by pay TV providers to give free trials to would-be subscribers without the need to deliver a set-top box, with services delivered direct to TVs. However, he said, the device could also be used as an option to replace CI+ conditional access modules.

“We expect the technology to be used for flexible packages,” Trudelle said. This could include weekend or day passes to premium content or other packages that could extend pay TV to reach new audiences that are unwilling to sign up for a full-fledged service.

The USB 3.0 device has a secure chipset. “This is next-generation CI in many ways,” Trudelle told DTVE at IBC. He said he saw hybrid deployments of premium broadcast and OTT content as a potential application.

Trudelle said at the time that Nagra and Samsung ultimately hoped to open up the technology to other manufacturers to create a standard-based approach to security that could potentially replace CI+.

“It’s an exciting set of options for service providers. You lose a lot of control in term sof the user experience because you have to leverage the UI of the TV set or an HbbTV-based UI. It’s not as sophisticated as a set-top box,” he said.

The USB key is one of a range of options that Nagra developed over the past year. Others include a more sophisticated HDMI dongle with Chromecast-like functionality to deliver OTT services to the TV.