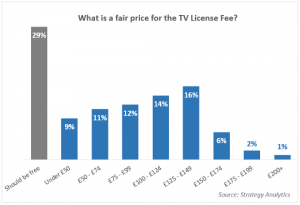 The UK public back the annual licence fee to fund pubcaster the BBC, although many think the price is too high.

A new study from Strategy Analytics shows 71% of people in the UK rate the BBC as important and are satisfied with the service it provides. Older and wealthier respondents were more positive about the pubcaster, the analyst house said.

Asked about funding the BBC, 41% said the licence fee is the best option, 28% preferred an ad-funded model and 15% a subscription. Overall, 29% want the licence fee scrapped.

The licence fee currently costs £145.50, higher than the £101.57 that people said they were willing to pay. Less than half of the survey respondents did not actually know how much the current licence fee is.

Opinion was divided over closing the iPlayer loophole, whereby consumers using the streaming service have not had to have a TV licence. Strategy Analytics found that 40% agree with the loophole being closed but 47% disagree.

“Overall, the BBC has strong appeal with and satisfaction among the British public, although it struggles to identify with younger and lower income groups,” said David Mercer from Strategy Analytics’ digital consumer practice.

“These are the groups who tend to be most resistant to the idea of the licence fee, so the BBC will be under pressure to increase its ratings with these audiences if it wishes to retain the licence fee in future Charter negotiations.”