Changing viewing habits, including the growing adoption of HD and UHD TV and growth in non-linear consumption mean that TV platforms will need to evolve – including broadcasters enhancing their hybrid digital-terrestrial and broadband offerings and upgrading their broadcast transmission technology – according to Ofcom.

The UK communications regulator’s Connected Nations 2016 report on connectivity across the country said that some of the improvements are already underway. It cited the example of the Freeview Play service and the fact that the Freeview label will be available only for HD and UHD products as of 2017, while the latest D-Book specification will support UHD IPTV services.

Ofcom said that an improved selection of HD channels on DTT made possible in part by two interim DTT multiplexes which have widened the range of HD services on the platform, adding that HD services use more efficient compression and transmission technology – MPEG4 and DVB-T2 – which provide more channel capacity and which can effectively expand DTT capacity for other services in the future.

Regarding broadband, while 2Mbps connections are capable of delivering standard SD services, rising to 6-8Mbps for HD and 20-25Mbps for UHD TV, Ofcom said that higher headline broadband speeds than these may be needed to achieve a good consumer experience because other services compete for bandwidth. It said the adoption of HEVC could help reduce the connection speeds needed to deliver video, but pointed out that BT currently recommends that a connection speed of at least 44Mbit/s is needed to access its UHD sports services.

The majority of UK consumers can now receive HD services and the number and sophistication of hybrid broadcast and broadband TV platforms is continuing to develop rapidly, but live TV still represents over 80% of viewing, according to the report.

Some 59% of households now access HD services and approximately 30% of TV sales support HD and UHD, according to the report. 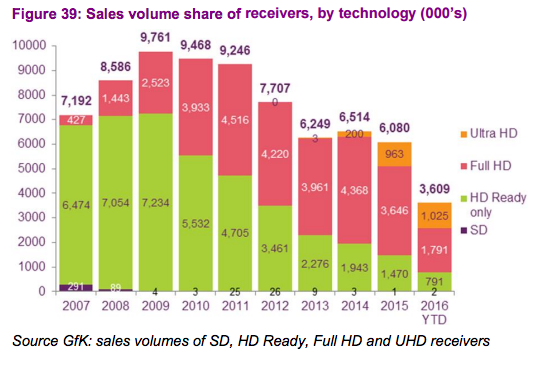 Ofcom cited research from 3 Reasons dating from 2015 to show that 62% of UK TV homes had a TV connected to the internet at the end of that year.

The regulator also said that the use of non-catch-up video on demand services also continues to grow. For example, the proportion of adults watching short online video clips such as YouTube and Vimeo)per week has risen from 20% in 2014 to 25% in 2016, while use of SVOD services is also growing.

Digital-terrestrial TV multiplexes have between 54% and 99% coverage, depending on the mux, while digital satellite has 98% reach and Virgin Media cable broadband has 45% reach.