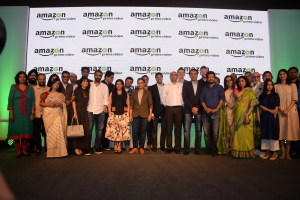 Netflix and Amazon go head-to-head in IndiaStreaming service Netflix has bagged exclusive SVOD rights to movies from India’s Red Chillies Entertainment for the next three years, as Amazon Prime Video revealed a raft of original series from the territory.

The first title from the pact will be Dear Zindagi, which was released theatrically on November 25, with others such as Happy New Year, Dilwale and Om Shanti Om.

They will be made available exclusively in India and other Netflix territories, a significant attraction for potential Indian subscribers.

“Shah Rukh Khan is the most sought-after actor in the Indian film industry, and has played a huge role in bringing Indian cinema to the world stage,” said Netflix chief content officer Ted Sarandos. “His moniker ‘King Khan’ speaks to his status as a cultural icon and to the incredible popularity of his films among audiences worldwide”.

Rukh Khan said the Netflix partnership means “no more waiting for our fans wherever they are”.

“Red Chillies is surging ahead in global entertainment and for the first time, our great stories are going global on Netflix all at once and crossing all geographical barriers, waiting to be discovered over the world,” he added.

The news is a boon for Netflix, following the announcement of Amazon Prime Video’s international roll out yesterday.

Amazon is launching a raft of Indian original series to tie in with its Indian debut. These include Equinox Features’ Bodhidharma: Master of Shaolin, Abundantia Entertainment’s Breathe, AIB- and OML-coproduced The Ministry, Excel Media & Entertainment’s Powerplay, Phantom Films’ Stardust, D2R Films’ The Family Man, Big Synergy’s Vishpuri, and Made in Heaven, from Excel and Tiger Baby.

“India has one of the richest and most vibrant entertainment industries in the world – Amazon is energised by the talent and the passion of India’s film industry and is excited to be making multiple Indian original shows already, with more to come,” said Roy Price, VP and head of Amazon Studios.

“It’s no secret that Amazon is making a big investment in India and is happy to take original content, created by Indian talent, to audiences worldwide. We are also making a commitment to our Indian customers to deliver high-quality, binge-worthy shows that they’ll love to watch.”