The growth of short-form content was only eclipsed by the major increase in live viewing, which increased 60% year-on-year, again driven largely by Olympics and news coverage.

Short-form and live content achieved high double-digit growth, with the Olympics and US election driving much of that traffic.

Sports and News categories grew by 76% and 45% respectively. 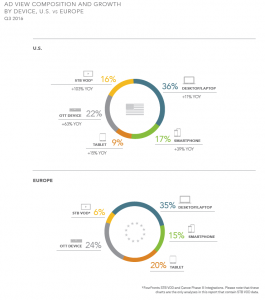 Long-form content, which has shown double-digit growth since FreeWheel started producing this report in 2010, continued to increase – 18% year-on-year – as more consumers chose to watch shows in non-linear environments.

Programmatic buying and selling remains relatively small in relation to video. While programmers are transacting with more automation, which saw 92% year-on-year growth, automatic trading remains small part of the overall monetisation strategy, representing 7.3% of ad views, according to the report.