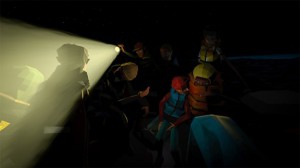 The BBC has launched its first virtual reality (VR) production on the Oculus store.

The film, titled We Wait, is an animated depiction of migrants making the dangerous boat journey from Turkey to Greece and was produced by BBC Connected Studio in collaboration with Aardman Digital.

The VR experience first launched on the BBC Taster website earlier this year as part of the BBC’s unveiling of its first “true VR” pieces of content – alongside projects like history documentary Easter Rising: Voice of a Rebel and VR fairy tale The Turning Forest.

“This film going live on the Oculus store for the Rift opens the film up to a wider audience, and caps off a big year for VR at the BBC, as we continue to explore the potential this emerging medium has to inform, educate and entertain,” said BBC R&D executive producer, Zillah Watson.

“Our VR experiments this year have enabled us to look at the role the BBC should play at this early stage, raising important questions over how storytelling, pacing, direction, subtitling, sound and picture quality are all affected.”