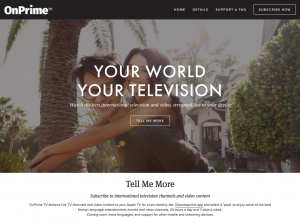 Sky has teamed up with Cisco to develop an app-based international OTT project called OnPrime TV.

The service, which does not carry Sky or Cisco branding, offers what it describes as “some of the best foreign language entertainment, movies and news channels, live and over the internet”

OnPrime TV is available on Apple TV, iPads, iPhones, Android phones and tablets, Roku streaming media devices, and Sony PS3/4 and Microsoft Xbox One game consoles, according to Cisco. The service is currently available only in Germany and the UK, but other countries are to be added over time.

OnPrime TV current offers an Arabic pack for £9.99 or €11.99 a month, with a one month free trial, offering a suite of channels from Rotana – the Saudi media group owned by Prince Al-Waleed Bin Talal in which 21st Century Fox and News Corp hold an 18.97% stake – including Rotana Aflam, Rotana Cinema, Rotana Khalijia, Rotana Clip and Rotana Mousica, along with LBC.

1+1 issued a press release at the end of last week in which it referred to OnPrime TV as a joint project between Sky UK and Cisco and to it being available in 29 countries across Europe.

“We are constantly working to ensure that everyone interested has access to the channel’s content in a way convenient for them. After all, there has been an increase in audience interest to 1+1 International. On the one hand, this contributes to capacity growth and success of the 1+1 Media’s in-house production; on the other hand, it to the development of technical capabilities for signal delivery. We believe that this partnership will bring long-term benefits and OnPrime TV will soon become the European audience’s favourite platform,” said Vladislav Svinchenko, general producer of 1+1 International.

The service also offers a Star pack for £8.99 featuring Star Gold, Star Life OK and Star Plus, and a free news pack with Sky News, Sky News Arabia and France 24 in French, English and Arabic.

Although Sky has not publicly announced its involvement in the project, it appears to have advertised earlier this year for a senior product lead to “support with an exciting new project” with a six-month contract to run from December.

According to a job ad posted online, the product lead would be charged with managing the new product in the early life of its launch, coordinating multiple content providers and dealing with Sky’s technology partner – in this case Cisco.

Sky said that the product lead would be given the mission to “establish and nurture a relationship with Cisco so Sky maintains its preferred status as launch provider, getting prominence within the app and building mutual success”.

The job description also calls for an individual who can work with other Sky teams as well as external content providers to develop new packs that Sky could put on the platform, “either exploiting the existing rights that we have, or – to address the needs of ethno-linguistic communities – additional foreign language packs.”

Other requirements include that the product lead will “work with OnPrime TV and Cisco to ensure that the Sky Packs are launched on the right platforms at the right time, that the customer experience on these platforms within the app come up to the promise of the Sky brand” and that “the functionality and features of the app suit what our customers want”.

Cisco’s involvement appears to be via 1Mainstream, the OTT platform provider it acquired last year, which is named on the OnPrime TV website as the company behind the service.