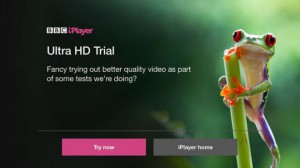 Viewers with a compatible connected UHD TV can open up their iPlayer app and view a four-minute HDR clip of the show in 4K resolution.

The BBC iPlayer test footage follows a jaguar emerging from the shadows to stalk prey and the effects of rain dropping on tiny animals and their habitats, including a range of greens and a frog in a shade of red that the BBC says has never before been seen on a TV.

The test uses the Hybrid Log Gamma (HLG) HDR technology developed by the BBC and Japanese public broadcaster NHK, making it viewable only on the latest Panasonic TVs.

Most devices capable of playing back HDR content, including the PS4 and Xbox One game consoles and LG and Sony 4K TVs use the HDR10 technology or the Dolby Vision HDR technology developed by Dolby. Netflix and Amazon are backing both HDR10 and Dolby Vision.

HLG is backward-compatible with some SDR displays and has been developed by the BBC and NHK as a royalty-free standard.

Recent TV models from other manufacturers are capable of being updated to add HLG support, but it is as yet unclear how far the technology will be adopted.

HLG was recently added to the ITU’s HDR-TV standard. The BBC and NHK developed the technology because of concerns that rival formats would not fit easily into a typical broadcast infrastructure with complex content workflows, in particular because approaches that rely on end-to-end metadata – including HDR10 – would cause significant problems. The BBC also wanted an approach that was compatible with its current 10-bit infrastructure and would only require changes to cameras and critical monitoring displays to be implemented.

Phil Layton, head of broadcast and connected systems, BBC Research & Development, said: “Increasing the dynamic range of TV images makes a huge difference to how real the images appear to viewers – it’s closer to looking through a window than watching a standard TV set. Crucially, HLG works with existing TV technology and workflows making it ideal for broadcasters, and audiences, all over the world.”

Dan Taylor-Watt, head of BBC iPlayer, said: “The extra quality HLG brings to Ultra HD needs to be seen to be believed. It’s still early days for the technology but this experiment puts us in the best possible position once audience demand is there. This year we’ve brought live events like the Euros and Olympics to iPlayer, introduced new personalised features and now we’re giving people a glimpse of what the future may hold.”