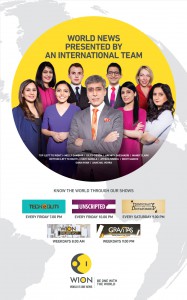 Zee Media-owned international English-language news channel, WION (World is One News) has formally launched with a 360-degree marketing campaign headlined “WION – Be One With the World”.

The move follows a soft launch of the India-based service in August.

The multi-city campaign will take off across various platforms including TV, print, radio, DTH TV and digital platforms.

The first phase of the marketing campaign will focus on the India market, gradually extending to other markets across the world in a second phase.

WION is described by Zee as a global news network that brings news from around the world but with a South Asian view. The goal of the channel is to engage and empower viewers through balanced and extraordinary storytelling. The channel aims to explore and understand the stake of South Asian region in world affairs by pushing the boundaries of innovation on digital, mobile and television platforms.

The channel will have bureaus in 37 global locations, and has staked a claim to be the first India based network to have its presence in regions including the UK, USA, China, Russia and Africa.

In addition to hard news, WION will offer general entertainment content covering genres including lifestyle, human stories, animals, food, environment and fashion among others. It is also placing emphasis on user-generated content through a Citizen-Journalism App.

Rajiv Singh, executive director and COO, Zee Media Corporation Limited said: “A revolutionary product from the Zee Media stable, WION represents a sophisticated transition from the usual ‘Breaking News’ phenomenon. WION brings exclusive and insightful content that often escapes popular media. Targeting upscale viewers in India as well as the Indian diaspora, our endeavour is to showcase content that truly represents the spirit of South Asia with focus on India. Embracing our philosophy of ‘Vasudhaiva Kutumbakam – The World is My Family’, through WION we believe that news will be the common thread that binds us all together.”

Rohit Gandhi, editor-in-chief of WION said: “In an increasingly divided and violent world, the content at WION is carefully curated keeping in mind the sensitivities of all regional identities. While the news genre already has different filters – American, British and Middle-East, there is no South Asian lens that helps the world understand the South Asian perspective on world affairs; WION aims to bridge this gap. WION targets a generation that is global, social, value-oriented, visual and technologically savvy. We tell stories relevant to a wider global audience and to the millennial generation that consumes news on the go. The news at WION is easy to consume without sacrificing in-depth analysis of issues.”