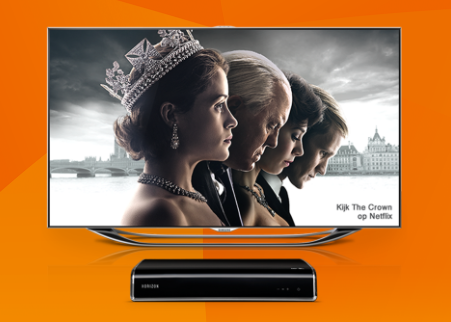 Netflix has launched on Liberty Global’s Horizon advanced TV platform in the Netherlands – the first launch of the service by the international cable group following the deal struck between Liberty Global and the streaming video giant in September.

Netflix is now available on the Ziggo cable platform in the Netherlands. Ziggo subscribers can access the Netflix app direct on channel 150 on their Horizon Mediabox guide or alongside other on-demand apps.

The Netflix launch on Ziggo will enable the latter’s customers to view shows including The Crown, Narcos, Stranger Things and Orange is the New Black direct on their TVs via the Horizon service.

Ziggo’s addition of Netflix to its Horizon offering follows the addition earlier this month of RTL Netherland’s subscrdiption video-on-demand service Videoland, which is available on the adjacent channel 151.

Ziggo is offering Videoland free of charge to its subscribers for one month. The SVOD service normally costs €8.99 s month.

The deal between Liberty Global and Netflix, which followed the launch of the SVOD service on UK cable operator Virgin Media in 2013 – a deal signed before Virgin was acquired by Liberty – represented something of a change of heart on the part of the cable giant.

Liberty Global CEO Mike Fries had previously indicated he saw Netflix as representing a kind of transitional phase in the development of SVOD that would ultimately be supplanted by cable, which could offer superior connectivity and a compelling user experience.

Since then, however, at least in Europe, Netflix and infrastructure-based network operators have moved towards seeing each other as key partners, with the former emphasizing its original content play and the latter looking to convergence and their role as aggregator and distributor of OTT services as part of their overall content play.