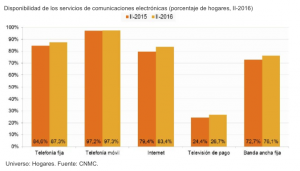 Pay TV penetration in Spain has grown by 10% over the last year, while 28% of the country’s installed base of TVs are now connected to the internet, up 17.3%, according to figures released by the country’s competition regulator, the CNMC.

According to the CNMC, 26.7% of Spaniards said they took pay TV at the end of the second quarter of this year, up from 24.4% a year ago.

Some 47.1% of pay TV subscribers said they took a pay services because their operator provided it along with other services such as broadband and telephony – the highest rated reason for taking pay TV.

Some 25.3% said they took pay TV because there were interested in documentary channels, with 24.2% saying they liked pay TV because it offered a way to view fewer TV ads.

According to the regulator, 83.4% of Spanish homes had an internet connection in June, up 5%. Fixed-line internet penetration stood at 76.1%, with 36.2% having a fibre connection.

According to the numbers reported by the CNMC, 52% of internet homes reported having an ADSL of VDSL connection, down from 65.8%, while the number with a fibre connection increased from 22.8% to 36.2%. Those reporting a cable broadband connection numbered 12.7%, down from 15.8%.