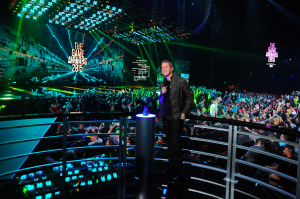 YouTube has launched 4K live streaming for both 360° videos and standard videos.

The move is part the Google-owned online video platform’s push into live video, as well as the latest development of its six-year old foray into 4K.

Live events are automatically available on iOS, Android 4.0+, game console devices and mobile devices via the YouTube app and m.youtube.com.

YouTube is live-streaming the Game Awards (pictured) live in 4K as part of its launch effort.

YouTube, like other social media platforms, is increasing emphasis on the live element of its service, as EMEA chief Stephen Nuttall outlined at a Royal Television Society event in London this week.

“Supporting this new format will let creators and partners stream incredibly high-resolution video, and let viewers enjoy the clearest picture possible when watching a live stream on 4K-supported devices. The image quality is just mind-blowing on screens that support it, and in 360 degrees…the clarity can truly transport you,” said Kurt Wilms, Senior Product Manager at YouTube, in a blog posting.

4K video isn’t just a little different from HD video; it’s a giant leap. It shows eigh million pixels total, with an image that has four times more image definition than even 1080p video. What does this mean in real world terms? Live streams look better, show a more detailed, crisper picture, and aren’t as blurry when there’s fast action on screen. Basically, 4K makes everything better to look at. And because we support 4K at up to 60 frames per second, creators can make content that looks silky smooth, and more realistic than ever before.For creators this means the ability to take advantage of an incredibly clear picture for recorded and now streaming video.”