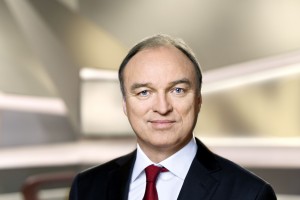 Thomas Ebeling will leave ProSiebenSat.1 at the end of his current deal.

The chief of the German broadcast giant told a local magazine he plans to step down when his current contract expires in 2019, and the company confirmed the news to DTVE‘s sister title TBI today.

His deal runs until end-June 2019, by which point Ebeling will be 60 and he will have been at the company for a decade.

He has worked extensively outside of TV including stints at drinks giant Pepsi and pharmaceutical firm Novartis.

The news of his impending exit was revealed in an interview with the German title Manager Magazin, in which he suggested that 60 was too old to run a media business.

“If possible, this should be it,” he said. “Because of the professional conviction that every company needs a new head after ten years, and that one should not head a media company as a 60 year old. Even if I could perhaps still do it.”

He did not detail future plans in the interview, beyond saying: “I can later imagine a job with an investor or something international. Maybe I’ll be coach and business angel again at 60.”

ProSieben is in the throes of refocusing its business towards digital, and away from TV advertising and Ebeling will remain at the helm as that process continues, until 2019.

“We are making very good progress with the transformation of our company from a TV house to a digital player,” he said in the wake of ProSieben’s latest results. “In the first nine months, we already generated 46 % of our revenues outside the traditional TV advertising business.

“We consistently forge ahead with this development. With the strong TV business as the basis and the digital entertainment, commerce and production activities, we are well positioned to achieve our goals. By 2018, we aim to achieve revenues of €1.7 billion with our digital business.”

Ebeiling joined ProSieben in March 2009. He is also on the board of pharmaceuticals and chemicals business Bayer, and life sciences firm Lonza.