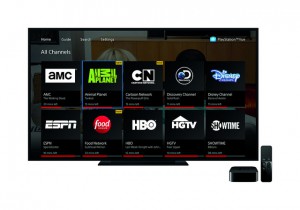 Sony’s over-the-top TV service PlayStation Vue has launched as an app for Apple TV in the US.

PS Vue is available now on fourth generation Apple TVs– the most recent version of the streaming box, which launched last year.

Announcing the launch, Sony said that Apple TV was “one of the most highly requested devices by our fans”.

New customers can sign up for one of several plan options – starting at US$29.99 per month – through the PlayStation Vue website and link their account to Apple TV without needing a PlayStation console.

PlayStation Vue launched on Android TVs in the US late last month and Sony said that PC and Mac support would follow soon. In the summer it also went live on Roku streaming devices and Android smartphones and tablets.

In terms of PlayStation Vue’s content offering, BBC America went live this month, however some 20 Viacom networks were pulled from the OTT service including Comedy Central, Spike, Nickelodeon and MTV.