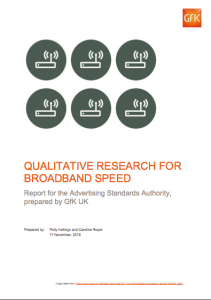 The UK’s Advertising Standards Authority has called for a change to the way broadband speed claims are advertised to ensure consumers are not misled.

The decision came as the ASA published research it commissioned from GfK, which found that many people are unclear about what the numbers given in operator ads mean for them and what speed they would likely achieve.

“Crucially, the research shows that despite that uncertainty most consumers believe they are likely to receive a speed at or close to the headline speed claim when, for many, that is not likely to be the case,” said the ASA.

Currently, the standards permit headline speed claims that are achievable by at least 10% of customers, where they are preceded with the words “up to” and qualified, as appropriate, to help manage consumers’ expectations of achievable speeds.

At the same time the Committees of Advertising Practice (CAP) said that it will review its guidance to advertisers on broadband speed claims, and will report publicly in spring 2017.

“Making sure ads don’t mislead is at the heart of what we do. We’ve taken action this year to tackle confusing broadband pricing, to the benefit of consumers,” said ASA chief executive, Guy Parker.

“Our new research indicates that speed claims in ads contribute to consumers’ expectations of the broadband speeds they’ll receive, but their expectations are not being met. That needs to change.”

CAP director, Shahriar Coupal said: “CAP welcomes the ASA’s research and we’ll now begin the process of updating our guidance and publish a response next spring.”