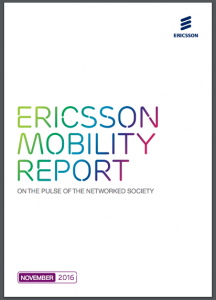 Mobile video traffic is forecast to grow by around 50% annually through 2022, when it will account for nearly 75% of all mobile data traffic, according to Ericsson.

The company’s latest Mobility Report claims that social networking, the second biggest data traffic type after video, is forecast to grow by 39% annually over the coming six years.

However, social’s relative share of traffic will decline from 15% in 2016 to around 10% in 2022, as a result of the stronger growth in the video category – which also includes embedded video in social media and web pages.

“YouTube still dominates video traffic in most mobile networks, although it’s being challenged by local players in some countries,” according to the Ericsson report.

“YouTube traffic accounts for between 40–70% of total video traffic for almost all measured networks, regardless of device type. Netflix is available in most markets now and, in some, its share of video traffic can reach 10–20% of total mobile video traffic. In other markets, Netflix’s share of traffic is still very small.”

According to 2016 network traffic measurements, Ericsson found that 58% of tablet traffic, 42% of smartphone and 42% of laptop traffic was dedicated to video.

The proportion of smartphone users accessing live video apps is also tipped to triple in the US, driving growth in cellular and WiFi wireless data traffic.

Despite this, the study found that roughly one in every five smartphone users surveyed across 14 global markets face video streaming issues on a daily basis.