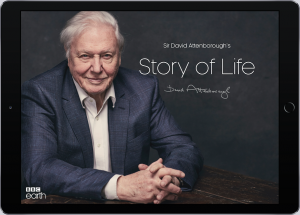 The BBC will launch a new app featuring a raft of content from respected naturalist and presenter Sir David Attenborough later this week.

The Story of Life app launches on Thursday (November 17) on Apple and Android devices. The BBC owns all of the content and the app will be available worldwide.

It will have iconic moments from Attenborough’s broadcasting career including his interaction with mountain gorillas in Life on Earth, and his extraordinary meeting with a sloth in The Life of Mammals, The Story of Life.

The BBC said that at launch there will be over 1,000 clips accessible via the app, which the public broadcaster said has been timed to coincide with the naturalist’s 90th birthday year.

“This is natural history for the digital age, allowing people to explore the story of life on earth and share their favourite natural history moments with the world,” said Attenborough.

The collection of clips can be searched via ‘Habitat’, ‘Species’ and ‘Behaviour’ and users can create their own collections of favourite clips, which can also be shared. There will also be exclusive easter eggs, with a series of films hidden in the app.

The app has been made by BBC Earth and digital agency AKQA.