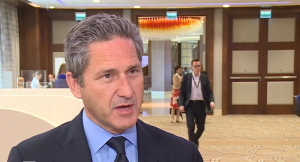 Liberty Global CEO Mike Fries has described mobile as “strategically critical” and outlined ambitious plans to more than double its mobile base in the next five years.

Speaking on Liberty’s third quarter earnings call, Fries said that mobile is now “unquestionably a core part of our product strategy and our customer value proposition” and described fixed-mobile convergence as “inevitable”.

“You can see that 15% of our 17 million broadband subscribers take a mobile service from us today. We think that number should reach 30% to 40% in every market we operate in over time,” said Fries on the call.

In a slide deck to accompany the call, Liberty said that it aimed to reach 30%-40% combined convergence between its mobile and broadband subscribers in 2021.

“That number will ultimately depend on the size and the composition of our broadband base, our ability to offer best-in-market mobile data products [and] a bunch of other factors as well,” said Fries.

“But there is significant growth ahead of us in mobile as a product. Also, we know that as we grow that product there are huge benefits in our fixed base, higher ARPU, lower churn, happier customers.”

Fries said that Liberty is focused on developing a “quad-play bundle in every market” and said the most important thing was getting post-paid subscribers added to the footprint.

Discussing connectivity more generally, Liberty said that it is also ramping up its infrastructure build-out to new homes in Europe.

“We’re accelerating our new-build activity every year from this point forward. From 900,000, in fact, last year to 1.3 million new homes this year, growing to as much as 2.5 million homes in 2018.”

Cumulatively, Liberty Global said it has a target to connect 5.6 – 6.3 million new homes between the start of 2015 and the end of 2018 and identified the UK as its “largest new-build programme”.

Liberty’s UK operator, Virgin Media, is currently in the process of rolling out superfast broadband as part of a £3 billion (€4 billion) scheme dubbed Project Lightning.

Speaking on the call, Virgin Media CEO Tom Mockridge said that the long-running debate about BT’s involvement in Openreach would not impact on Virgin’s plans.

“Frankly, if we were a cynic, we might say that a bit of the disruption at BT is to our advantage,” said Mockridge. “BT had a long period of advantage in this country where the old Virgin Media wasn’t investing. Now with Liberty Global as our shareholder, we’ve got the resources to do it, so we’re running our own race and making a success of that.”