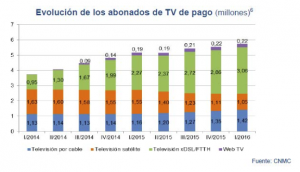 The number of pay TV users in Spain passed 5.7 million at the end of the first quarter of this year, according to figures compiled by competition regulator the CNMC, with IPTV and cable adding a million customers over the year to the end of March, offsetting a decline of half a million satellite users.

According to the CNMC, there were 3.06 million cable subscribers at the end of the quarter,  up from  2.27 million a year earlier. IPTV users numbered 1.42 million, up from 1.16 million, while satellite TV users declined from 1.55 million to 1.05 million. The number of web TV users remained more or less unchanged at 0.22 million, up from 0.19 million.

Growth in fixed-line pay TV is in line with growth in multi-play packages in the country, with increasing numbers of people bundlien fixed broadband, TV and mobile services. Quad- and quint-play subscribers reached 10 million at the end of March, up 1.4 million year-on-year.

The CNMC said that audiovisual services in the round saw revenue growth of 13.7% year-on-year. Pay TV operator Movistar accounts for 45.2% of the market, with revenues up 4.3% year-on-year. Vodafone grew 5% to achieve a 18.6% share of the market. Orange had a 16% share.

Free broadcasters Mediaset and Atresmedia had 2.5% and 2.8% shares respectively.