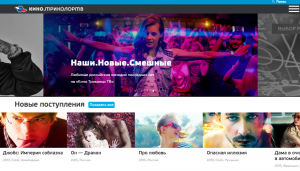 The pay TV operator has struck deals with online video services Tvigle and Tvzavr, and broadcaster and OTT video service provider Amedia to provide content for the service.

All movies abnd TV series on Kino Tricolor TV are in HD and the service can be accessed by fixed and mobile devices connected to the web.

Tricolor had previously launched an online portal with information about TV, cinema, fashion, sport and digital technologies. The portal, Tricolortvmag.ru, was launched late last year and has recorded 2.9 million unique visitors to date. The group has nw launched a mobile version of this service with a dedicated app for iOS and Android devices, including the ability to view content offline.

CEO Alexey Kholodov said that Tricolor TV could no longer be viewed just as a satellite TV company but as a provider of entertainment and information services across all digital media.

Tricolor’s move is part of a drive by all three leading Russian satellite pay TV operators to expand their services to embrace non-linear and multiscreen OTT distribution.

Orion Express CEO Kirill Makhno has meanwhile told Russian press that his company would launch an online movie service before the end of this year. Makhno said that Orion was already testing the service and would launch with a partner rather than negotiate rights deals directly.