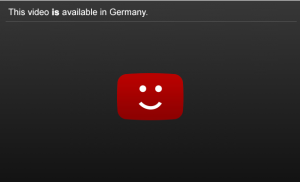 YouTube has struck a deal with German music rights organisation, GEMA, making music videos by many major label artists available on the German version of the video site for the first time in seven years.

While the two sides failed to agree financial terms over how much artists should be compensated each time their music is played, music videos and other videos that containing background music were unaccessible on YouTube from German IP addresses.

Commenting on the new deal, Christophe Muller, YouTube’s head of International Music Partnerships, said: “This is a win for music artists around the world, enabling them to reach new and existing fans in Germany, while also earning money from the advertising on their videos.”

“This agreement reflects a long-held commitment that composers, songwriters, and publishers should be paid fairly, while ensuring fans can enjoy their favourite songs and discover new music on YouTube.”

GEMA, which represents 70,000 music authors and publishers, said that after years of legal disputes and lengthy negotiations the new deal marked a milestone for the organisation and its members.

“Our position is that authors are entitled to a fair remuneration also in the digital age, and we have remained faithful [to that] despite all obstacles,” said the CEO of GEMA, Harald Heker

While terms of the deal were not disclosed, GEMA said that they covered both YouTube’s ad-supported service and its US subscription-based service, which it said is due to roll out in Europe.

In the US, YouTube Red lets viewers access an ad-free version of YouTube and watch videos offline on phones and tablets and is compatible with YouTube’s standalone music service.