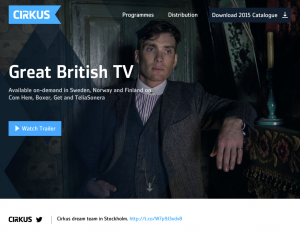 Cirkus is available to all DNA TV subscribers without an additional fee until January 31 2017. From 1 February, customers will be able to order the service as part of the DNA TV service.

The regular price of the service to DNA customers is €5.95.

The Cirkus on-demand programme library offers a variety of British drama and crime series, including numerous BBC productions, as well as some TV films. All programmes are available with Finnish subtitling.

DNA customer will be able to watch Cirkus on a TV screen with a DNA set-top box, with their smartphone or tablet via DNA TV apps or on their computer via tv.dna.fi.

”We are delighted to have reached agreement with DNA to make available great British drama and crime programming on-demand, whenever, wherever. We’re sure DNA TV subscribers will enjoy watching complete seasons of the best of British drama & crime and indulging their appetite for Great British actors and performances,” said Mark Bradford, Cirkus co-founder and director.