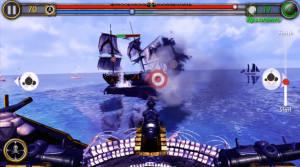 Channel 4 has partnered with mobile games firm Subunderground for Pirate Quest, a new game that is due out later this year.

All 4 Games, Channel 4’s gaming publishing arm, teamed up with Subunderground on the app, which tasks players with conquering seven pirate clans by shooting enemies, looting treasure and sacrificing crew to defend their ships.

“All 4 Games have been an incredible help in completing Pirate Quest. They instantly understood our vision for the game, and their support has enabled us to throw ourselves into delivering a beautiful, fun experience, while they ensure we can reach as many players as possible,” said Harvey Greensall, co-founder of Subunderground.

Colin MacDonald, head of All 4 Games, added: “It’s been great working with the guys at Subunderground on their first game as a company, as they bring an artistic edge that makes their games so engaging and user friendly.”

Channel 4’s Glasgow based games arm launched in summer 2015 with the aim to release Channel 4-funded mobile games and games from third party developers as part of an aggregated All 4 Games brand. Its first three titles, Fire Fu, Super Arc Light and Apestorm, were unveiled in January.