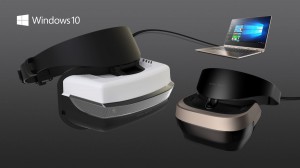 Microsoft this week announced that it is partnering with PC makers to build a range of “innovative VR headsets”.

At a Microsoft Windows 10 event at New York, the company revealed that the headsets will be priced from just US$299 and will launch next year.

HP, Dell, Lenovo, Asus, and Acer will ship the first VR headsets capable of mixed reality and “unlike every other virtual reality headset in the market today, there will be zero need for a separate room and complicated setup,” said Microsoft.

With its ‘Creators Update’, Microsoft said that “powerful and affordable virtual reality is coming to everyone” with its VR headsets to be compatible with “affordable laptops and PCs”.

“Coming as a free update early next year to the more than 400 million devices running Windows 10 and available to Windows Insiders this week, the Creators Update will bring 3D and mixed reality to everyone, empower every gamer to be a broadcaster, connect people faster to those they care about most, and much more,” said the company

At the event, where Microsoft also announced new Surface tablets, laptops and computers, the company promised “3D for everyone” and said that Microsoft Edge will be the first browser to “fully embrace 3D across devices”.