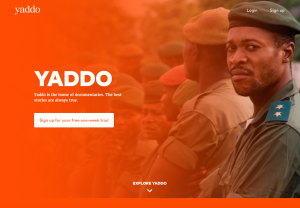 Yaddo, the new documentary SVOD service from BBC factual commissioner Nick Fraser, has launched as an app for iOS and Android.

The app went live on the App Store today and is available to download on iPhones, iPads or iPod Touch devices running iOS 8.0 or later. The Android app was added to the Google Play store on Friday and is compatible with Android phones and tablets running Android 4.3 and later.

Speaking to DTVE at MIPCOM last week, Fraser said that Yaddo would go live formally this week but its full international rollout would be staggered.

“It starts off launching in Europe and then it goes to the rest of the world shortly afterwards – in two month’s time,” he said.

Yaddo is powered by on-demand platform provider Magine, was first unveiled at the end of September and has been roughly a year and a half in the making.

The service, which is also accessible online via web browsers, offers viewers a curated, themed selection of feature documentaries articles and short content for £3.99 per-month.

Fraser previously edited the BBC’s acclaimed Storyville documentary strand since its inception 17 years ago, and been involved in more than 340 films over the course of his career.