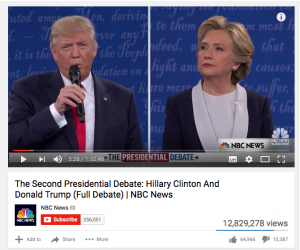 “This year, more news organisations live streamed the U.S. presidential debates on YouTube than ever before, and we saw record-breaking interest from the YouTube community,” said YouTube’s product lead, live streaming, Kurt Wilms.

“The 2016 presidential debates rank as the three most-viewed political live streams of all time.”

Engaged viewers tuning in live watched an average 22 minutes across all three presidential debates, while concurrent viewership “consistently peaked towards the end of the debate”.

In total, YouTube recorded 140 million views on all debate-related videos and said that elections-related YouTube searches are at “an all-time high” with searches for US election content up 547% compared to this time in the last presidential race.