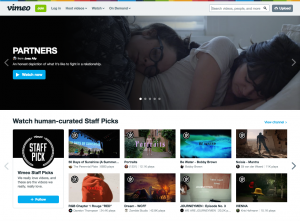 Vimeo is planning to move into the live video streaming space for the first time, DTVE has learned.

A spokesperson for the company confirmed that live streaming is coming “soon”   – possibly by the end of the year – though would not give a firm rollout date.

Live streaming will be available via mobile and desktop and will be a part of Vimeo’s creator platform.

VHX, the white-label streaming platform that Vimeo acquired earlier this year, is also integrating live streaming for its SVOD channel partners, and may roll it out even earlier.

“We’re excited to help our sellers tap into the Apple and Roku app marketplaces, where the potential for discovery and subscriber conversion is huge,” said VHX’s co-founder and head of product, Casey Pugh, after the deal was announced in May.

News of the live streaming move comes in the same week that Vimeo launched a new transactional TV store, with Lionsgate and Starz the first partners to come on board to provide content to the service.

Vimeo’s move into live video will put it head-to-head with YouTube, Facebook and other entrants into the space, such as Twitter-owned Periscope.

Earlier this month, Periscope started to let content creators stream live video from sources other than smartphones and tablets for the first time. In a move aimed at brands and media organisations, video producers can now use streaming software, hardware encoders, and professional cameras to broadcast using Periscope.