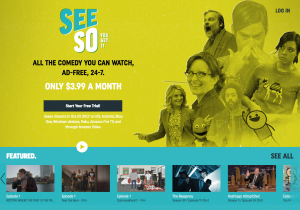 The series will follow a wide-eyed, 19-year-old Nebraskan, who stumbles his way into a job on The Tonight Show, and a young talent coordinator determined to prove herself. The series will explore the social and political upheaval of the era, touching on the Vietnam War, President Nixon and the growing counter-culture of the era.

Presenter Carson hosted The Tonight Show for 30 years on NBC, effectively establishing the model for the modern last-night talk show.

Thanks to participation from the Carson Estate, There’s… Johnny! will have unprecedented access to archives of the entertainer, and will include real footage along with the live-action.

The series is being coproduced by Seeso, Nuance Productions, Comedy Dynamics and Rough House, in association with the Carson Estate.

Carson’s nephew, Jeff Sotzing, who runs the Carson Estate following his uncle’s passing in 2005, is also an exec-producer. Craig Knizek is producer.

“Growing up, the coolest thing imaginable was to someday get on The Tonight Show Starring Johnny Carson and make Johnny laugh,” said Reiser. “The fact that I got to do that was a dream come true, and going back now to explore that world, and pay homage to Johnny and that golden time is an absolute joy.”

The series debuts next year, around the same time as another comedy-drama set in the 1970s, LA entertainment scene-set I’m Dying Up here dbuts on US premium cable service sShowtime.

Seeso launched earlier this as a thematic comedy SVOD service and as part of NBCU’s push into OTT distribution.